WHAT IS SOLARWINDS HACK?

SolarWinds Hack is a cyberattack discovered recently in the Unites States. It was mainly targeted against US Government and agencies and may have affected several other companies across the world.  It was first reported in Dec 8, 2020; when a prominent cyber security company FireEye confirmed an attack on their systems, through a blog. The methods used by the attackers were novel and they tried to steel information related to certain government customers.

Attackers used a different mode of operation (Supply Chain Attack) in this case.

SolarWinds is an IT company which supplies IT management software called Orion to several Government and other private organizations. As per published client lists, Orion business software has been used by more than 33,000 companies, which includes 400+ Fortune 500 companies and 10+ telecom operators in US.

In a Supply Chain attack, instead of directly attacking the government or a private organization’s network, attackers target a third-party vendor who supplies software to these entities (which in this instance is Orion software from SolarWinds).

Hackers gained access to victim’s systems via Trojanized software updates to Orion .Software updates were exploited to install the Sunburst malware into servers running with Orion. Adversaries used Orion software updates that company distributed between March and June 2020 to plant the malicious code in the target’s servers. Once installed, this malware provides a backdoor entry for hackers to enter the systems and networks to steal data. This malware is capable of gathering critical information, running remote commands, and exfiltrating the results to an attacker-controlled server stealthily. After systems were compromised, “lateral movement and data theft” did also take place. It was estimated that infected software updates were installed by more than 18,000 customers.

Organizations are advised to check whether they have installed the vulnerable versions of 2019.4 HF 5 through 2020.2.1, released between March 2020 and June 2020 on their servers. 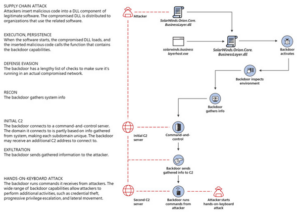 According to FireEye, attackers used multiple techniques to avoid being detected by various scanners. Virus activities were blended with legitimate Orion business activities in such a way that they looked genuine and normal.

SolarWinds says 18,000 of their clients have been impacted. A New York Times report said parts of the Pentagon, Centers for Disease Control and Prevention, the State Department, the Justice Department, and others, were all impacted. It is considered to be one of the biggest ever cyberattack targeted against US Government and Agencies. According to FireEye, it is likely that the issue began in March 2020 and has been ongoing for months.

Evidence suggest that attackers have been conducting dry runs as early as October 2019. The compromised DLL file is digitally signed implies a compromise of the company’s software development or distribution pipeline.

The extent of data stolen or compromised is still unknown, given the scale of the attack is still being discovered. The sheer scale of the cyber-attack remains unknown even today. Though the specific number of infected victims remains unknown at this time, it has steadily increased since cybersecurity firm FireEye revealed it.

How difficult was to detect it?

Attackers managed to modify a plugin that was distributed as part of Orion platform updates. The Trojanized component was digitally signed, which contained a backdoor that communicates with third-party servers controlled by the attackers.

How to protect your VMWare vSphere?

SolarWinds Orion hack is VMWare vSphere vulnerable. In order to ensure that your VMWare ESXi hosts are protected, SolarWinds Orion updates, affected by the malware are installed, take the following precautionary actions:

Microsoft confirmed that it had found evidence of this malware (SolarWinds Hack) on some of their systems, and already issued warning to their customers.

Further investigation of the SolarWinds compromise by Microsoft 365 research team has also lead to the discovery of additional malware (dubbed as Supernova) that affects the SolarWinds Orion software, which is likely to be by a different threat actor. Digital forensic evidence showed the possibility of such a different threat actor abusing the Orion software to drop a similar backdoor on target systems.

SolarWinds hack is considered to be one of the biggest ever cyberattack targeted against US Government and Agencies. The methods used by the attackers were a novel supply chain attack. The extent of data stolen or compromised remains unknown even today. But it has steadily increased since cybersecurity firm FireEye revealed it. Software supply chain attacks are some of the hardest type of threats to prevent or detect.

Solution Architect & IT Consultant with more than 25 yrs of IT Experience. Served various roles with both national and international institutions. Expertise in working with both legacy and advanced technology stacks in various business domains.